I have a confession to make: I never learned how to swim.  It’s limited me my entire life, and lately I’ve seriously considering doing something about it.  Sure there have been times over the years where I’ve had the opportunity to learn and passed it up.  But recently it’s been on my mind a lot, especially as my own girls have started taking swimming lessons.  Seeing them enjoy the water and have fun splashing around has reminded me of all the fun I’ve missed out on over the years, all because of my fear of a little H2O.  It’s time I learn how to swim, and when I look back on this decision it’ll be this weekend at the pool, and my daughter Olivia that will mark my turning point.

I have to first explain by saying that I’ve always assumed Olivia was the only risk taker.  When Riley (my oldest) was a baby, she was super shy and didn’t like loud noises or a lot of people.  Olivia on the other hand was a lot more of a people person and much more talkative.  Yet, as they’ve grown older I’ve come to see different aspects of risk taking in each of them.  Riley has a lot of confidence in her abilities, probably because she’s a typical Type A personality (as the oldest) and she’s been very successful in school thus far.  Olivia, as the typical middle child, sort of went the opposite direction.  Where Riley likes rules, Olivia doesn’t really care for them so much.  Sometimes I mistake rule following for being synonymous with not taking risks.  In actuality, they’re both risk takers, just in their own ways.  Sometimes the rules limit Riley and what she’s willing to pursue, and sometimes Olivia’s desire to do things her own way blinds her to the consequences of her own decisions.  London (our third daughter) is probably more of a risk taker than either of them right now, simply because she’s willing to do anything to keep up with her sisters despite her physical limitations as a 2 year old.  I’m learning I can’t always put them in a box, as they grow they’re also becoming multi-faceted and it’s exciting seeing their character take shape as intricately complicated little people.

So we’re at the pool Friday evening enjoying a relaxing time, taking a break to eat some freeze pops and my wife presents the girls with a challenge: in order to get back in the pool you have to jump in.  I can still see the look on Riley’s face, initial panic and then determination.  Then, Riley takes my wife up on the challenge and dives in, exclaiming to her sisters sitting on the sidelines, that was fun!  Riley was having a blast jumping in the water, meanwhile her sister London wanted in on the fun and soon she was climbing down the steps and leaping into her mother’s arms as well.  As for Olivia, she’s wasn’t interested.  She’s sat on the sidelines next to me both of us possibly for the same reason: fear.   I’ve told myself that it’s because I never wanted to learn or because I’ve never had time, but really it’s because I’m afraid.  That’s what it boils down to.

It was heartbreaking  sitting there next to Olivia watching her miss out on something so special and fun, simply because of fear.  But, who was I to tell her anything different in that moment?  So I did what any good father would do, I got up and tossed her into the pool.  True story.  She knew it was coming because at first I tried cajoling her and explaining that it wouldn’t be all that bad, she should just try it.  She was sad that she couldn’t get back into the pool, but she wasn’t willing to take the leap of faith required to jump in the water.  Quite the paradox.  After a few minutes of this approach, I realized that she wasn’t going to get over her fear, so I simply picked her up and (gently) tossed her in and you know what?  She survived.  Go figure.  Perhaps I will as well.

This weekend is also important because my secret is now out of the bag.  While we were all in the pool I admitted to the girls that I can’t swim.  Riley, was a bit shocked saying, I didn’t know you couldn’t swim.  I’m sure Olivia won’t be so kind in the future.  I can always count on her to recognize contradictions.  And so I must learn how to swim, and soon.  Sure there are basic safety concerns and it’s likely a part of adulting 101.  But at its core, it’s about overcoming fear and proving to myself and my daughters that sometimes it’s ok to take that leap of faith and jump in the pool.  Diving in can be scary, but you know what’s worse?  Regret. 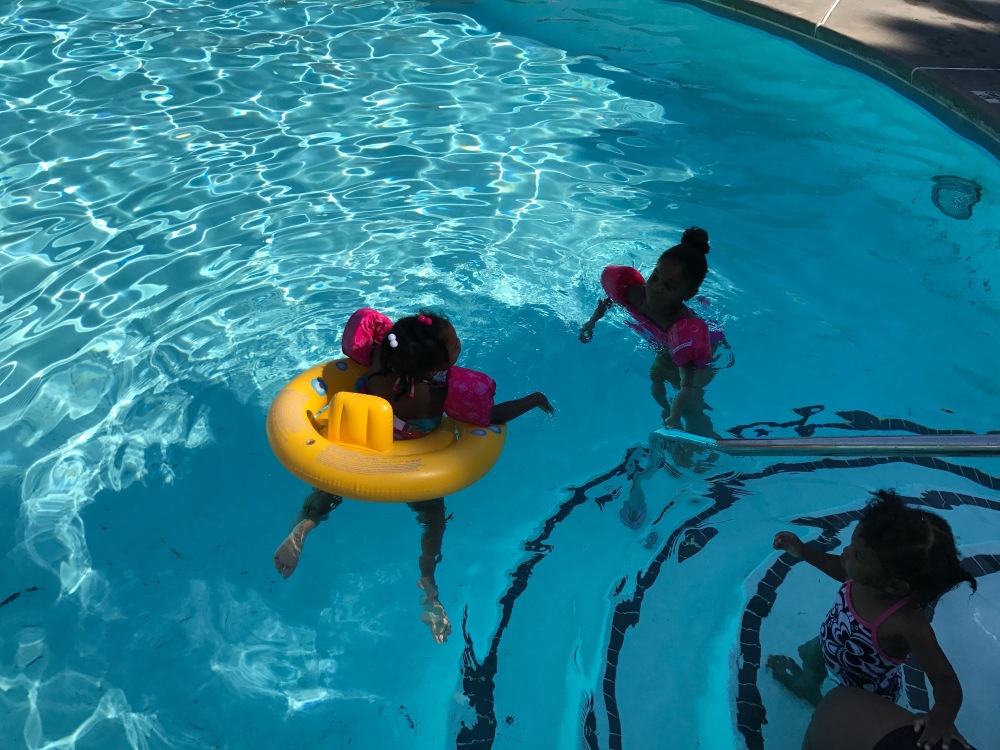