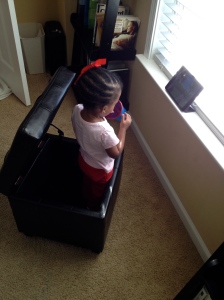 Man, there’s a lot to being a stay at home dad, I have a lot of respect for those guys.  Today I had a glimpse of as I tried to juggle working from home with my youngest daughter (18 months).  My oldest was in school, but as circumstance would have it, grandma wasn’t feeling so well so I had double daddy duty today.  This isn’t the first time, and it probably won’t be the last.  And each time I do have to work from home while watching one or both of my daughters, I develop a deeper appreciation for just how much it takes to really balance work and fatherhood.

My day began around 5:30 (really it was supposed to start at 5 but it was sooo cold!).  I knew that since I’d be home with the girls, I would need to get started early with work, quiet time, and generally getting my head together before I had to be “on” for everyone else.  That’s probably the key to making this work, dads.  If you don’t get an early start, you may be playing catch up for the rest of the day.  By 7:15 when the girls started stirring, I had already finished my personal quiet time, checked emails, done some writing, and gotten breakfast started.  I was on a roll, though in all fairness, the morning time is usually my most productive part of the day before distractions offset me.  Between 7:30-9 it was feeding the girls breakfast, getting them dressed, dropping my oldest off at school, and heading back to the house to begin my day part duex.

I tried to rely on PBS kids for the next 3 hours, but let’s face it, there’s only so much Sesame Street, Super Why, and Peg+Cat that I can take…lol.  We split our time back and forth between upstairs and downstairs- I took my cues from Olivia.  As her attention waned on a setting, or TV show, I knew that I’d have to relocate with my laptop, notebook, and snacks to another room.  By the time of my first conference call I had my saving grace: naptime!  She only slept for about 45 minutes but it seemed like a vacation!  By 1:30, she was up again and as I finished up a final load of laundry (yep, that was getting done too), I also finished up one more call before it was time to pick up my oldest (Riley) from school.  By then it was after 3pm and all the heavy thinking for the day would have to wait until tomorrow…my brain was fried so I spent the last hour and half after arriving home simply trying to knock off quick easy emails and follow up tasks before shutting it down for the day.  It’s the most exhausted I’ve felt in a while…

I’m tired just reliving the memory!  The funny thing though is that I’m both physically and mentally tired.  I’m physically tired because of the energy required to engage a toddler while also trying to actually do work, and mentally tired because of the mental agility required to bounce back and forth between both priorities all day long.  It’s basically like working two jobs at the same time and both require your full attention at various times during the day, but neither can really get it.  I’m thankful that my wife is off tomorrow J.