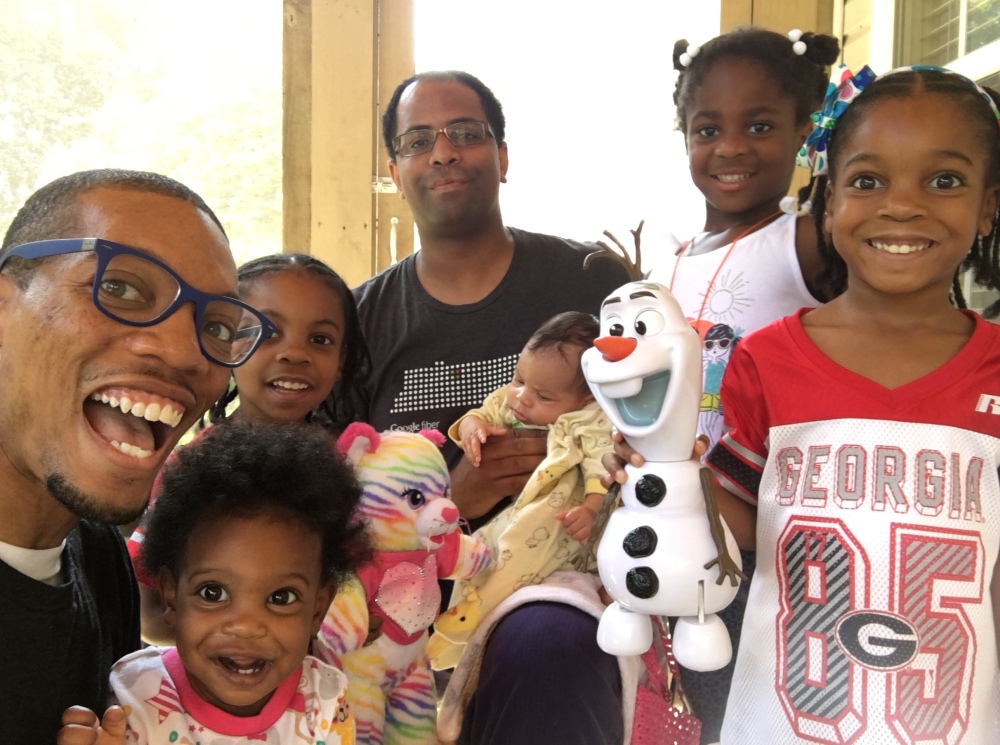 This is me with one of my closest friends and his family this weekend, on Daddy duty while our wives were off doing something (who knows?).  We’ve known each other since freshmen year of college, starting dating our wives that same year (who ended up bridesmaids in each others weddings), got married within a few years of each other after college, and finally started our families around the same time.  We’ve basically grown up together and so have our kids.  So when they up and moved away to Nashville last year, we were a bit sad, but as good friends do, we’ve kept in touch.

This past weekend we loaded up the family into our van and went on a road trip to visit our good friends in Nashville.  The visit itself was great, and I’m sure the memories we made will last for a lifetime for ourselves and likely the kids.  One memory in particular that still resonates from the weekend is Sunday afternoon where my niece presented her weekly goals and priorities to a roomful of adults.

For the past few weeks we’ve been working with my niece (who is 16) on the concept of action planning for her week, and essentially organizing her life around a set of priorities.  We started by asking her what she wants to accomplish with her life, where she wants to grow as a person this year, and also had her take a strengths finder assessment to better understand her passions and interests.  At the end of each week we sit down and review what’s happened academically, and set goals, priorities, and action plan academically and personally for the upcoming week.  It’s still a work in progress, but this past weekend she was tasked with doing the exercise on her own and then presenting her action plan to us to confirm that the lessons are in fact sticking.

Stepping back just a bit, what precipitated all of this was my initial concern at how she spent her time during the first few weeks of school.  I would see her come home from school and have nothing to do for hours except browse her phone and wonder, why does my 6 year old have more work to do than the 16 year old?  Finally that question was answered when we went to curriculum night at her school and I learned that she had in fact been given work in her classes (and even had already taken and failed a few quizzes), but she simply lacked the will and skill to organize her time.

Knowing now that we needed to be more proactive about building strong study habits, we started with the big picture of why this was important and came to realize that she has essentially been operating without a clear sense of purpose and direction for most of her educational career.  She had always been bad at math, so she stopped trying to succeed in that subject area.  Yet, we know from spending time with her that she has long term goals and aspirations for college, having a career, etc.  She wasn’t seeing the disconnect between her actions and her vision for her life, so it became our job to help her to see the need to better align her habits to her end goals.

This was her first time completing the action planning process on her own.  This in fact will be the first week upcoming where she’ll be solely responsible for implementing her own plan as well.  The past 2 weeks we’ve been pretty involved about reminding her daily to study, or complete a task her plan.  At the end of last week we transitioned from the heavy coaching phase to the stop and watch phase.  As an adult she won’t have someone constantly watching over her saying, do this, plan that, so we’ve got to get her prepared to own her own decisions and lead her own life (leadership is after all a re-occuring theme in our household).

Back to the weekend, when she finally got up Sunday afternoon to share her action plan (my idea, not hers by the way to actually publicly share it to our friends and their parents who were also visiting), I was extremely proud of her progress.  To watch her stand up there and articulate something as simple, yet profound as her own goals for the week and her own priorities and why those things mattered…it was priceless.  And, she got the added benefit of practicing her public speaking (yeah, I’m that kind of uncle…I believe the word she used was “unreasonable” lol).  Good thing for her this unreasonable uncle is totally reasonable about the right things: a child’s propensity for growth and the adults around them responsibility for equipping kids to grow as leaders.  The more time we spend with her, the more I’m beginning to feel there’s a growing sense of destiny about what she can accomplish and become.  Likewise, the more resolute I am that what we’re doing with our own younger 3 girls will one day pay huge dividends in their own leadership by the time they’re teenagers.